The Roof Continues To Fall

What would you do if you saw a roof caving in on a house? What would you do if you saw an older gentleman at the house? Would you tell someone? Would you be concerned for the well being of the individual? Or would you just walk on by?
Well, I didn't just walk on by. I reported the house to the City. I took a picture of the house with the roof caving in, and I sent it to 311. That was on April 27, 2011. I wrote about this house back on July 21, including an update from the City Planning office. I was told the owner had until the end of September to tear down the back extention of the house or the City would do it themselves.
Then I did an update article on October 3, showing the roof was still falling in on itself. I guess the City Planning office did not follow through on tearing down the back extention of the house.
Yesterday I drove down the lane to find the roof is still falling in on itself. The back extention is still attached to the house. But the house is painted. At least the portions of the house that are to remain intact. 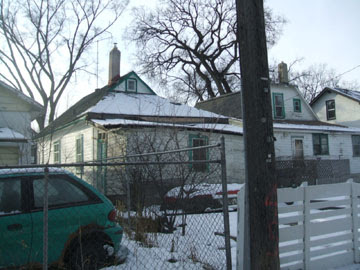 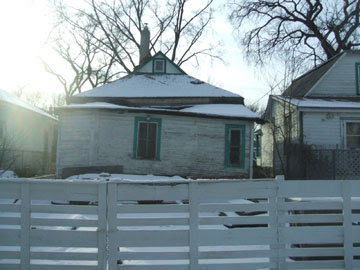 So, why is the roof still caving in? And why is the back extention still connected to the house? This issue was reported by me on April 27 of this year, and the owner had until the end of September to deal with it.
If I have my information correct, the City Planning and the By-Laws people do not have a mechanism for follow-up. They don't have a system of notification when a deadline comes due. And I guess they are busy dealing with new issues.
That means this person doesn't really have to do anything about their house. Nobody is going to check on it. Not unless some citizen contacts 311 to let them know there is something wrong.
You would think they could set up a filing system, or make a spreadsheet to notify themselves of deadlines that may come up. But why bother. The system is complaint driven, and if people don't complain, nothing gets done. Maybe I haven't complained at enough of the proper time intervals to have this issue taken care of. Or maybe there is nothing actually wrong.
More tax dollars paying more City workers, so nothing happens here.﻿
Posted by raespace at 11:18 AM