My Street Is Covered In A Clean Blanket Of Snow

I went for a walk today, on my own. This was the first time I have ventured more than a block from my home on foot alone since the shootings in October. The shootings are no longer a topic of news, and are drifting from peoples memories.
I have tried to get back to normal, but things kept happening.
A few days after the murders, there was the sound of a shot gun coming from behind my house, somewhere in the back lane, or very close. Then I watched a person steal a car, right in front of my window. And there were the other actions occurring within view of my house. Then last week I had an unfortunate encounter with a person on a bicycle. I have been looking at bicycles along the side streets of the North End in a different light since the murders. I remember the Police said the individual or individuals doing the shootings were seen traveling by bicycle.

But today, I went for a walk on my own, and I left my block.
As I left the house I noticed not one, but two McDonald's coffee cups. They were discarded on the street and on the boulevard. It seems they are always discarded right in front of my house. I guess I live exactly the distance from McDonalds that it takes to finish a cup of coffee.
The snow has covered the North End in a fresh coat of crisp, clean camouflage. The yards are all filled with clean, white snow. You can still see the boarded houses, and the paint falling off the side of a few homes. You can still see the broken windows and fences that need repairs. But with a fresh coat of snow covering everything, it somehow seems less depressing. The snow seems to even things out a bit. The neighbourhood could almost be in another part of town.
I could not see any dirt and mud filled yards. The garbage strewn around the yards is hidden under the snow. For now, the yards are clean. With a fresh lick of paint, some of the rougher looking houses would look just fine.
I walked down the front street today, which was nice. Then on my way back home I took the lane. There were a few dumpsters that were overflowing already. It is only Tuesday today and the dumpsters are likely not getting emptied until Friday this week. 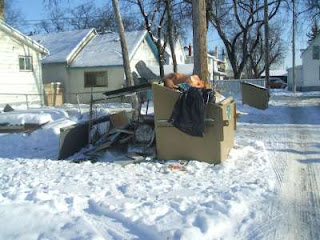 The dumpsters that are overflowing are not filled with residential garbage. They are filled with construction material, lumber, and paint cans. There was a dresser that was smashed into pieces and put into one of the dumpsters. And there was a couch and a couple of mattresses behind another dumpster down the block. Another dumpster was full of broken furniture and lumber. On my block alone there are three dumpsters now overflowing with non-residential garbage. We still have several days until the dumpsters will be emptied. As residents of the lane put their garbage out, it gets stacked on top of the already existing garbage in the dumpsters. Then it blows into the lane, or gets spilled into the lane as the dumpster gets emptied.
If our dumpters were used solely for residential garbage, they would not overflow, and would not spill out into the lane. Our dumpsters would be able to hold our household waste, and be emptied into the garbage trucks at the end of the week, and our lanes would be clean.
Out front streets are looking crisp and clean, but the back lanes will again turn into garbage strewn alleys.
Posted by raespace at 8:28 PM