An Outsiders Opinion ... I just can't stop my fingers!

I am not really back, but I was just listening to CJOB, the topic was overfilling dumpsters on 700 block of College. The resident said his new fancy garbage container just got emptied, but the hugely overflowing BFI autobin was still there, overflowing, in all it's smelly glory.
Now I am no expert on the current conditions of Winnipeg back lanes, and I have no desire to drive down my old back lane, or any other back lane in the North End for that matter. But from what I hear, there seems to be a problem in Waste Management at the City of Winnipeg.
Oh, and sorry to the reporter from The Sun who wanted to interview me on the subject. I don't do interviews anymore. But I do have to say something on this topic, right here, and right now.
When I was on the committee that made the decision on the new Garbage Masterplan, I distinctly remember saying there had to be a plan put in place to take care of the transition period in the North End and West End. I was told there would be. So, is there?
This is what I know about garbage pick-up for autobins. The  BFI truck drives down the lane. If the autobin is  too full, they don't pick up. If there are any items leaned up against the autobin, they don't  pick up. If there are any large items inside the autobin, they don't pick up. Oh, and they don't report the issue.
Now, if a resident reports that the autobin has not been emptied, they must describe the issue. If they do not mention items leaned up against the autobin, or large items inside the bin, and do not describe them properly, and say how many items there are, no truck is sent to correct the issue. If a truck does arrived to remove large items, it only removes items reported, to a maximum of 6 items, and does not report that it left anything behind. The resident must make a second complaint.
Now, if a BFI truck empties an autobin  and any garbage falls to the ground, they do not clean up the mess. That is up to the residents. In this case, if an autobin gets emptied, is there a truck right behind it to collect the empty autobin, or does it sit an hour, a day, or a week to be collected. If it sits even an hour, it will likely have garbage in it. I have seen dumpsters fill within minutes of being emptied.
If the dumpster has garbage in it again, the whole process starts over again.
Solution:
Get a regular BFI truck, and one that picks up bulky items. Team them with an employee who will pick up garbage that falls on the ground. And follow this with a truck that will pick up that dumpster. Make a parade out of it, and pick up one dumpster at a time.
The alternative is madness!
Posted by raespace at 11:18 AM 4 comments:

A Day In The Hood Has Left The Building

That's right, we left.
My husband and I no longer live in the North End of Winnipeg. We don't live anywhere in Winnipeg, for that matter. We moved into an RV, a home on wheels.
So, why didn't we just get another house in the City? That's easy to answer. We can't afford to live anywhere else. And I can't live in the North End anymore. But we can afford to purchase an older, used motorhome. And that is what we did.
I am not sure where we are going to 'live' now. I guess we will travel for a while and see what happens. (Follow our new adventures - Freedom at 51).
I would like to apologize to anyone who feels I have let them down with my leaving. But, one has to do what is best for oneself. I can no longer deal with the issues facing me on my street in the North End. It is not just the garbage in my back lane, or the illegal dumpers who think they can leave all their unwanted crap in my neighbourhood. It is not just the sirens, not just the helicopter, not just the constant fire trucks, ambulances, and police cars on my street. It is not just the graffiti now appearing in my lane. It is not just the partying that goes on all night long, and the yelling that we hear on the street. It is not just the drug houses on the street and the youth we see in neighbouring yards where they don't belong, uttering their threats as they look at us. It is not even just because someone broke into my house in the middle of the night when I was sleeping. It's the whole package. And I am sorry, but I just can't do it anymore.
We have left the North End for happier times.
If you want to know the turning point, the day we made the decision to leave, it was the day I wrote the blog post "The Decline And Fall of Civilization". That was the day I realized this City cares nothing of the North End, and will do nothing to fix it's issues.
North End, I wish you all the best going forward. And I pray the City will care enough to save you some day in the future.
Good day and God bless.
Posted by raespace at 7:46 PM 14 comments:

I Was Sleeping, You Know!

I was sleeping last night. I say it that way because I don't always sleep at night anymore. Some nights I am up all night with every noise outside. But last night I slept. Well, that is until something woke me.
There were noises outside on the street. They woke me from a sleep I could have used. When I opened my eyes, my husband was standing by the bedroom window. He was looking down the street. He didn't say a word, and I just lay in bed watching him. Then he came back to bed. Not a word. Then there was another noise outside, and I looked at him with that all too familiar look. It said "what now". He said there was an ambulance down the street. He said it has been there for a while.
I got up and took a look. Sure enough the ambulance was sitting on the street, lights flashing. A minute later there was the sound of a siren in the distance. It was getting louder, and louder. It was close. Then the siren stopped. With the siren off I could hear the sound of the fire truck nearing. Then the reflection of flashing red lights began bouncing off windows down the street. The lights moved closer, dancing off more windows as it approached. Then it stopped in front of the ambulance. I went back to bed.
For the next ten or fifteen minutes I heard the fire truck making noises as pumps operated. I have no idea what it was doing down the street. I found it odd that the ambulance was first on the scene and the fire truck came later, much later. Who knows what these people do at 4 o'clock in the morning. Finally, they were done.
The ambulance backed down the street, past my house, beeping it's back-up signal and flashing it's emergency lights. It stopped at the corner to wait for a car to pass. Then on it went, with the fire truck following behind.
So, now can I get more sleep?
If it's not one thing its another, on my street in the hood.
Posted by raespace at 11:42 AM No comments:

Burning Down The Lane

Oh, the sound of sirens. That all too familiar sound. Then it stopped. I know that means the fire must be close. I tore myself away from 'Talking Dead'. It was tough, but I did it. You never know if your fence, house, or dumpster might be on fire. It's always best to check.
It was dark outside, being 11:20pm and all. I had a quick look out the back window and saw an odd orange reflection in the neighbours window out back. That must be the fire. I went up to the window to have a closer look. Sure enough the fire truck was stopped right behind my house. That's a familiar spot for them to stop. They have been in that exact spot several times in the past few years.
Now I see it. Sparks are shooting up from the dumpster on the other side of the neighbours garage. Fire men are trying to get into the yard next door. They need to gain entry, and locate the neighbour so they can check the garage from the inside.
The fire was extinguished from the dumpster. I don't know how many times that dumpster has been on fire this year. It seems to be a popular one for torching. Someone stuffed a mattress into it a few days ago. I guess we should be happy we still have these large metal dumpsters. If the mattress was just thrown against the garage and lit on fire, the garage would have burnt. With the dumpsters the fires are contained. 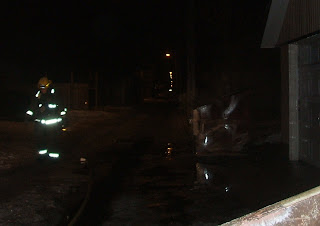 I noticed something else last night. It isn't anything new, I have seen it at every fire on the street, and every time the Police come into the neighbourhood. The firemen were in no hurry. I don't mean that they don't care. But they are not rushing to the job. They get out of the truck and survey the scene. I guess they discuss stragegy, then finally, extinguish the fire. They know what they are doing, and they get it done. But there is no panic in their actions. For this particular fire, it was a dumpster fire, a mattress burning in a contained unit. I am always a little surprised at the slow pace that our emergency personel work at. It is not like the movies or the cop shows on tv where everyone is rushing around and crimes get solved in 60 minutes. This is reality. These firemen risk their lives on a daily basis putting out arsons and accidental fires. And they do it in real time, one step at a time. I see this sort of reality all too often here in the hood. It is an education I never asked for, and one I could do without. 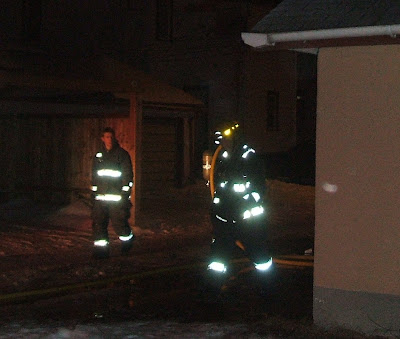